OUR VISION Toward becoming a company that supports future society by manufacturing products that are friendly to the global environment.

Teijin Frontier Co., Ltd. develops products and conducts business activities in strict compliance with THINK ECO®, Environmental Strategy. We as producers and consumers should be responsible for the Earth on which we live.
While what one company or one individual can do is very limited, Teijin Frontier Co., Ltd. is determined to do what it can through THINK ECO® activities. We will take on the challenges we face every day while giving due consideration to the materials we offer and future generations. 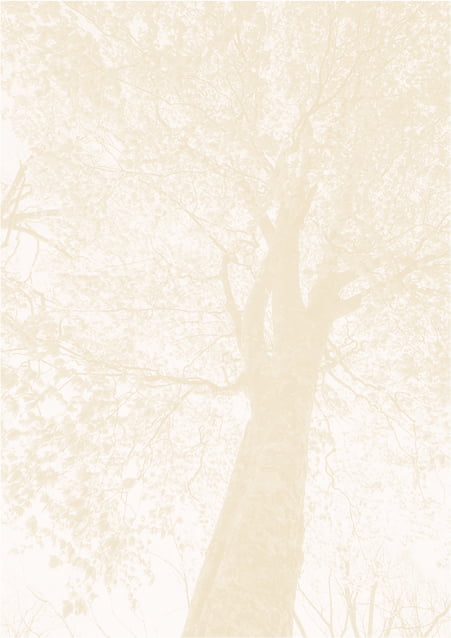 OUR activities Commitment to environmental protection via ECOPET®

In an effort to disseminate the significance of waste sorting and recycling and how new products are produced through recycling to many people, we not only provide products and recycled fibers, but also sponsor awareness-raising activities, such as recycling activities at event venues and the introduction of recycled products. 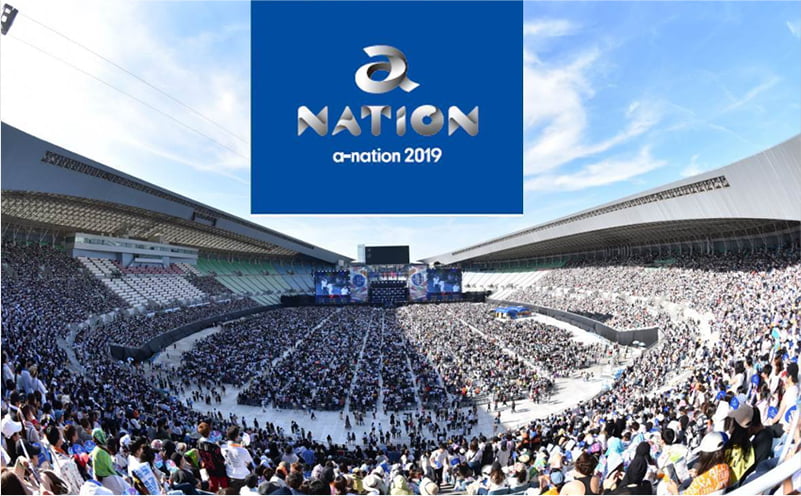 We co-sponsored the summer open-air live music event, a-nation 2019, organized by entertainment company the Avex Group in support of their recycling activity LOVE, PEACE & CLEAN at the venue.
The open-air live music event a-nation has been held every year by the Avex Group since 2002. Teijin Frontier Co., Ltd. joined the event in 2010 and we have collected a total of 12,350 kg of plastic PET bottles (508,200 500-ml plastic PET bottles) over the last decade.
While contributing to raising awareness and promoting this recycling activity, we communicated our commitment to reducing the burden on the environment by distributing misanga friendship bracelets made using ECOPET® recycled polyester fibers to visitors who cooperated in collecting plastic PET bottles. Upholding “THINK ECO” as a guideline for our environmental activities, our company practices environmentally-friendly activities—including recycling—in many fields ranging from clothing to industrial materials.

We promote the ECO Pass Project at Ajinomoto Stadium in collaboration with F.C. Tokyo 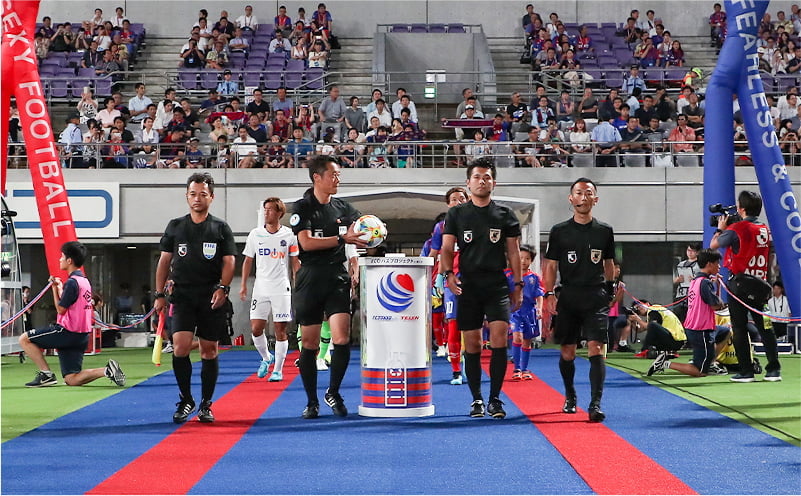 Since the 2017 season, we have been conducting the ECO Pass Project with F.C. Tokyo at Ajinomoto Stadium. Through the project, we collect plastic PET bottles during home games at the stadium. With the aim of collecting six tons of plastic PET bottles per year, we set up a collection meter on the ball box set up before each game starts to visualize our goal. Moreover, we sold eco-friendly bags made partly using the material created by recycling plastic PET bottles. We introduced this effort to the fans, supporters, and many other people by showing a video of the project on the large screen in the stadium and on a special website. 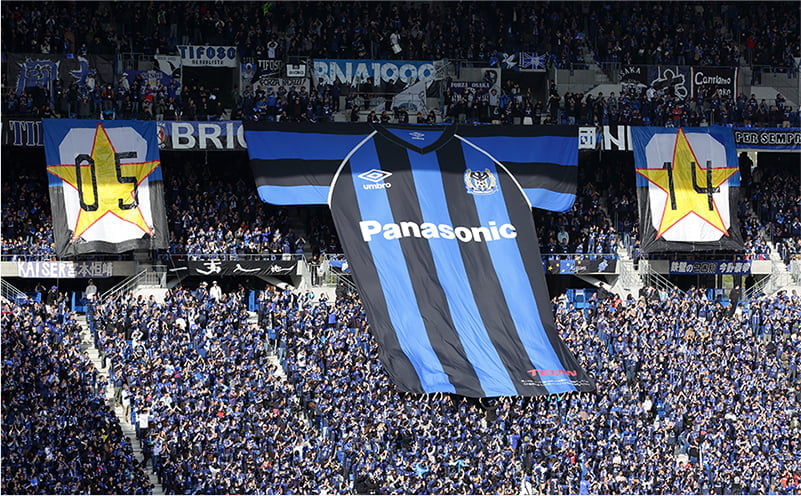 In 2017, recycling activities started in collaboration with Gamba Osaka to collect plastic PET bottles that were generated at the team’s home stadium. Student volunteers from Koji Mizuno’s seminar of the Faculty of Management, Otemon Gakuin University, who have conducted awareness raising activities such as waste sorting, call for the collection and sorting of plastic PET bottles at collection sites both inside and outside the stadium. They remove the caps of the bottles and dispose of leftover liquid, and the Teijin Group collects these bottles and sends them to recycling plants. Through these activities, we collected 80,000 plastic PET bottles and recycled about two tons in 2019. Moreover, the Teijin Group produces goods to support Gamba Osaka using recycled polyester to visualize the effect of recycling efforts at the stadium.

We support environmental conservation activities by Hanshin Koshien Stadium as a sponsor.

Since 2012, the Teijin Group and Hanshin Koshien Stadium have conducted the Hanshin Koshien Stadium Plastic Cup Recycling project with the aim of reducing plastic waste and recycling resources. Moreover, since May 2014, as an eco-sponsor, the Teijin Group has been supporting the efforts of the stadium as an eco-friendly stadium.
We collect polyester cups for the draft beer sold at the stadium and recycle them using the material technology of Teijin. We collect about 300,000 plastic cups each year and use part of the recycling resources as the raw material to produce novelty items that we then offer as free gifts during campaigns by the stadium. This activity has been well received by the fans of the Hanshin Tigers as a visible recycling effort. Since this activity also serves as experience-based environmental education for families with children, we plan to further promote it in the future.

In an effort to reduce ocean plastic pollution, the Group provides cooperation in promoting the Munakata Fes Eco Project. 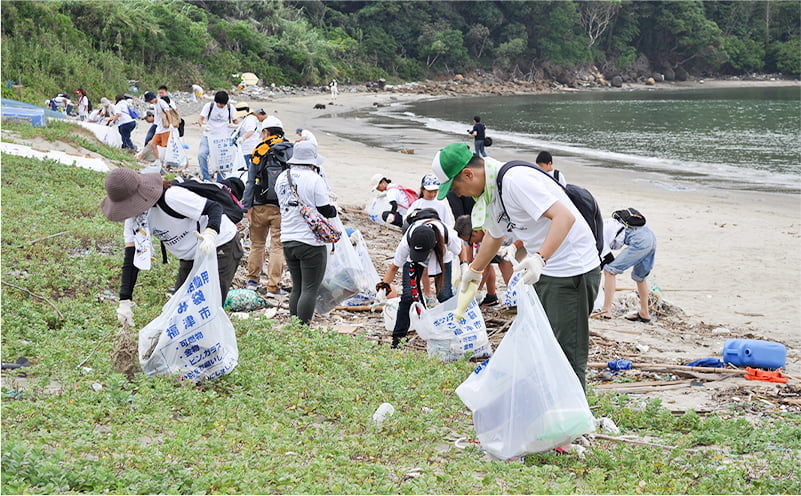 Our company collaborated with the executive committee of Munakata Fes, an open-air music festival in Fukutsu, Fukuoka, in promoting the Munakata Fes Eco Project, through which we collected recyclable waste generated at the venue. We also offered support for environmental activities such as the beach cleanup activities by Munakata City and Fukutsu City. These support activities included an environmental education project on the reduction of plastic waste on beaches conducted on August 24 at the Fukutsu Central Community Center, beach cleanup activities at Koinoura Beach, and recyclable waste sorting at the eco booth set up at the Munakata Fes site. We plan to recycle the collected plastic PET bottles into official goods for next year’s Munakata Fes. Moreover, in an effort to familiarize people with recycling, we provided T-shirts made using our recycled polyester fiber ECOPET PLUS® to the participants of the beach cleanup activities.